Tetrahydrocannabinol (THC) is known as the main psychoactive component found in marijuana. This compound elicits psychoactive effects through stimulation of the brain. THC is not only associated with the rewarding aspects of cannabis consumption, but also to several symptoms of mental illnesses and cognitive impairments. The legalization of marijuana to many countries, such as the United States and Canada, brought opportunities to the industry. This led to a quick expansion of the cannabis industry, and THC content has been increasing to accommodate many consumers.

Given the recent success of the cannabis industry, there has been an ongoing debate, whether it has a critical influence on public health or components of it serve as a therapeutic agent. Hence, this article expounds on THC, its effects, benefits, and harmful risks regarding potency and frequency of use.

Tetrahydrocannabinol (THC) is a psychoactive component of cannabis responsible for its euphoric effects. THC is one of the 113 cannabinoids identified with the chemical makeup of C₂₁H₃₀O₂ and a molecular mass of 314.464 g/mol. The natural chemical anandamide in the brain is analogous to this compound. It is a neurotransmitter involved in functions of the immune system as well as the central and peripheral systems. Studies also explore how anandamide plays a role in sleep patterns and pain relief. THC copies anandamide in an attempt to alter routine brain communications. Immediately after consuming cannabis, THC attaches to the neurons in the brain to modify its processes.

Over the past few decades, the amount of THC in marijuana has steadily climbed; today’s marijuana has three times the THC concentration compared to 25 years ago. The higher the THC amount, the stronger the effects on the brain. THC influences the essential functions of the brain, such as cognitive processes, memory, pleasure, concentration, movement, coordination, and sensations. For this reason, we cannot function normally while being high. This is why it is highly recommended to not drive under the influence of marijuana as THC alters our brain functions.

THC has the exact chemical makeup compared to its counterpart, CBD. Despite this similarity, cannabidiol (CBD) combats the psychoactive effects of THC. Below is a further comparison between the two.

Tetrahydrocannabinol (THC) and cannabidiol (CBD) are the most prominent cannabinoids found in marijuana. They cannot be activated unless the marijuana undergoes decarboxylation, which causes the initial acids, THCA and CBN, to be converted into the sought after THC and CBD. The most notable differences between the two substances are their opposite effects. THC causes the psychoactive effects in marijuana while CBD can be beneficial by inducing drowsiness, as well as reduce the adverse effects of THC. Both compounds interact with the endocannabinoid system in the body. These compounds copy the natural compound anandamide to attach themselves to the cannabinoids receptors. 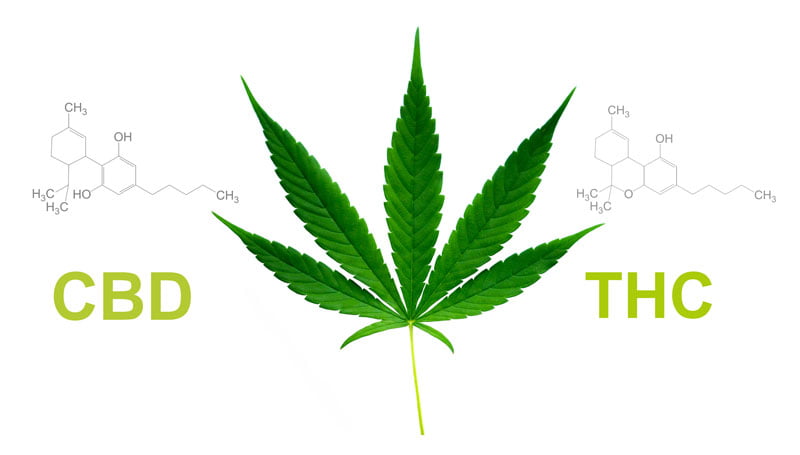 Besides modifying cognitive processes, THC triggers the cells in our brain to release dopamine. It is a hormone and a neurotransmitter that is responsible for reward-motivated behaviors and pleasure. THC stimulates dopamine by increasing dopamine concentrations in the terminal regions of the mesolimbic system. Long-term use of cannabis introduces developmental dopaminergic effects that pose harm to our bodies. Acute THC stimulation of the brain increases dopamine, but chronic exposure can weaken the dopaminergic system.

Marijuana users describe their experience as initially relaxing, creating a feeling of bliss. Their eyes dilate, which increases the intensity of their vision. The colors appear brighter and more vibrant. They suddenly feel everything at once with their heightened sensations. Subsequently, this pleasantry turns into paranoia and panic.

These are only some of the side effects associated with THC exposure. The initial effects diminish after a few hours, but THC remains in the body. THC stays in the body for between twenty hours and ten days. Of course, the timespan the drug stays in your system is dependent on the potency of what you took. Below is a list of the short-term effects associated with marijuana and high THC.

The studies for the long-term effects involving cannabis is limited, as it is illegal in most countries, as THC in marijuana is still associated with a drug dependence. But, compared with other drugs such as heroin, cocaine, and alcohol, cannabis dependence develops to fewer users at only 9%. Despite this finding, marijuana is categorized as a gateway drug because of its association with dopamine. This categorization means that cannabis consumption increases the likelihood to explore other, more dangerous drugs. Below is the list of long-term effects of THC in cannabis.

Despite numerous risks associated with marijuana, there are still studies involving its benefits.

The research discovered that THC increases the appetite of patients with eating disorders. There is considerable evidence that the endocannabinoid system plays a role in our appetite and feeding behaviors. Research shows the anandamide in the brain is inactive to patients with anorexia and bulimia. THC stimulates the endocannabinoid system to signal rewarding events such as eating and appetite restrictions.

Marijuana is also commonly used as an analgesic medication to relieve pain. The cannabinoids THC and CBD contribute to peripheral nerves to detect and halt pain sensations. Additionally, there is an FDA approved synthetic drug rich with THC called Marinol. Marketed as a safe alternative to medical marijuana, it highlights cannabis’ medicinal properties.

Marinol helps relieve the side effects of cancer medications like loss of appetite, nausea, vomiting, and pain. It is legal across many countries and only requires a doctor’s prescription.

Most people prefer to take Marinol to avoid smoking marijuana while enjoying its benefits. The only downside to this synthetic drug is that no one can consume it. You can only take it when other drugs that induce cancer treatment side effects do not work. Thus, you can only take Marinol as your last resort. It is also expensive compared to other drugs of similar uses.

THC Can Have Harmful Effects

The effects of THC towards dopamine levels depend on its potency. Studies discovered that the potency of THC in marijuana increased from about 4% in 1995 to 12% in 2014. Another study confirmed that the THC potency elicited from pot increased by up to 17.1%. The legalization of cannabis also opened opportunities for the production of a more potent variant, THC oil. THC oils are significantly more potent reaching up to 80% THC and higher. Low doses of THC produce increased dopamine, which contributes to the state of euphoria. Highly potent cannabis implies higher THC levels, which reduces dopamine synthesis. Prolonged use of marijuana also causes an immense effect on our dopamine. Repeated THC doses result in behavioral and neurochemical tolerance associated with drug dependence.

Typical marijuana dependent patients consume an average of 10 times each day. Prolonged use would affect them by having constant nausea and increased psychosis symptoms.

The harmful effects of high doses of marijuana differ as it depends on one’s tolerance. There is a high probability for younger marijuana users to suffer because their brains are still developing. This lack of development means that their cognition is greatly affected by high concentrations of THC. Therefore, people should educate themselves about the risks that can affect them for the rest of their lives. Remember the rule of thumb, “start low and go slow,” and you will be fine.