How to Store Weed

Weed is perishable, so there will be some point that it will expire. Fortunately, studies found that cannabinoids in weed remain fresh for up to two years after proper curing and storage. You cannot merely throw your weed in a sandwich bag and expect it to last forever. The best method to extend your weed quality requires modification towards an optimal environment. You can preserve weed while maintaining its freshness and quality after considering the strains and elements that affect its degradation. The weed packaging you got from a dispensary might include a harvest date, but it doesn’t guarantee the expiration of the product.

At a certain point, as you enjoy your weed, you ask yourself, “How long does it stay fresh?”. This guide is fully-equipped with all the information that you need to prolong the shelf-life of your weed.

The Ideal Place to Store Weed

The proper method of storage protects your weed from losing its potency and flavor. This system saves you a lot of money and keeps your weed safe to consume. You need to designate a cool, dark, and dry place to maintain the freshness of your weed. This environment is essential because elements such as temperature, light, moisture, and oxygen exposure contribute to the degradation of cannabis flowers.

For cannabis in an edible form that constitutes oil, sugar, and flour, it is best to refrigerate them. It is not ideal for edibles to be left out at room temperature since there is a tendency for mold to grow. Most cannabis edibles also lack food preservatives, which makes them susceptible to quickly going to waste if not placed in the fridge.

When dispensaries manufacture edibles, there is always an expiration date on them. Make sure to be on the lookout for the ‘best before’ date and suggested storage options. Subsequently, you can wrap the edibles in aluminum foil instead of plastic before storing them. Plastic immensely alters the taste of edibles when wrapped for long periods.

Cannabis oils, BHO, and honey oils should also be kept in a cool, dry place. Take extra precautions and avoid getting them close to heat sources as they are prone to ignite quickly. Throw them away as soon as the taste and odor turn awful, indicating the product’s expiration. If you maximize your storage options, you can prolong your weed’s shelf-life for up to six months.

Elements that Affect the Degradation of Cannabis Flowers

To successfully spark up your old weed, consider the elements below that are integral to prolonging its shelf-life:

Store your weed in a dark, cool, and dry place. Maintain an environment that is slightly below room temperature or below 21 degrees Celsius. High temperatures affect weed, causing it to dry out quickly. The terpenes evaporate decreasing the quality, odor, and taste of your weed. When you store cannabis at too low of a temperature, decarboxylation will deplete resulting in a loss of potency. You can also notice that trichomes become brittle and fall off easily when touched if the temperature is too low.

If you store your weed under a temperature that is too high, the formation of mildew and molds arises. Mold can cultivate when the environment is between 21 to 32 degrees Celsius. The grayish-white coating formed in weed and a distinct odor are clear indications of mildew and mold growth. It is not detrimental to your health to smoke moldy weed, but it can cause coughing, nausea, and vomiting. People who are allergic to molds are the most affected resulting in their sinuses or lungs becoming inflamed. Therefore, make sure not to expose your weed to harsh temperatures to prevent these adverse effects.

Oxygen is also an essential element to preserve the quality of weed. The air contributes to the decarboxylation process through oxidizing terpenes giving the distinct aroma of weed that you love. Although oxygen plays a vital role during curing and drying cannabis, it is essential to reduce it for storage.

Overexposure to oxygen can lead to degradation, which is bad for your weed. Degradation begins as soon as you consume your weed and expose it to air. The cannabinoids and terpenes begin to synthesize as the psychoactive properties decrease.

The key to prevent this is to limit its exposure to air as much as possible. Choose storage containers that are airtight with no air pockets that can infiltrate your weed. If you happen to place them in plastic bags, make sure to vacuum-seal them to ensure long-term storage. Make sure that the plastic bag you pick does not contain bisphenol A (BPA).

BPA can mix into your weed and make it intoxicating for human consumption. Also, do not freeze vacuum-sealed weed, as the extreme temperature can cause the trichomes to become brittle.

People who consume weed as medication are especially affected by various contaminants at high relative humidity. As an example, cancer patients are likely to catch aspergillosis from the ingestion of moldy weed. Aspergillosis is a fatal fungus targeting the lungs or sinuses. These fungi affect the white blood cells causing blood clots to make you cough blood. Other symptoms include shortness of breath, sharp pain in the chest, and high fever. Thus, it is vital to control the moisture content of your weed to prevent contaminants and molds.

Light conditions are the most critical factor that affects the quality of weed. Dispensaries might expose weed to bright lights when on display, but as a consumer, consider limiting exposure to preserve its quality. Light deteriorates cannabinoids over time, converting THCA into THC. The THC that remains in weed after gradual conversion turns into cannabinol (CBN) as well. This degradation process affects your weed, making it less potent and eventually useless. Light is a form of energy characterized by electromagnetic radiation that can be damaging at short wavelengths. Radiation breaks down the organic compounds found in weed that alter its chemical structure.

If you happen to store your weed in a glass jar placed in a dimmed room, it will come in contact with UV light. Ultraviolet (UV) light is similar to visible light with the radiation that it produces that contributes to degradation. Therefore, it is ideal for storing weed in an enclosed space, such as a cabinet, ensuring minimal light exposure.

It is essential to keep weed in an airtight container to avoid contaminants and molds. The container you choose must be the right size. Ensure it is not too big to prevent moisture and not too small that all your weed won’t fit.

You can easily make your glass jars airtight if you cannot find any other airtight containers. Moldable glues are widely available in craft stores, which can be used to DIY your jar. You only need to mold the glue according to the lid’s shape and let it sit for 24 hours. As soon as it hardens, you can effectively use it as an airtight container. 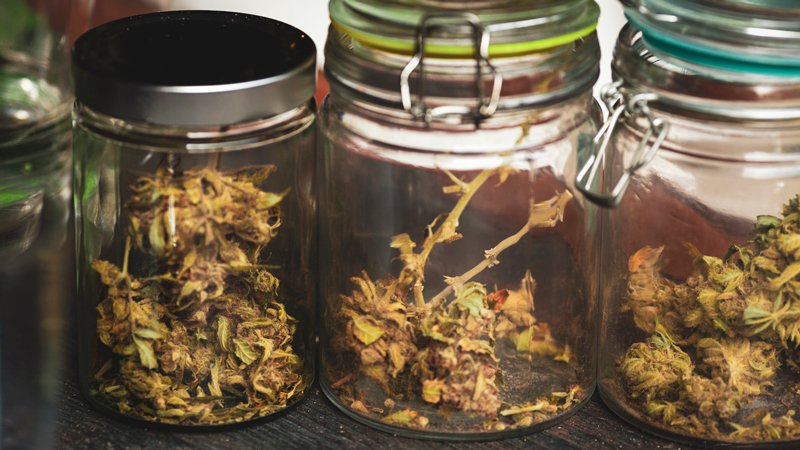 Should I Freeze Edibles?

Freezing can help preserve your edibles, but the quality would never be the same. Freezing your product exposes it to many impurities affecting its properties. Refrigerating it can also result in temperature fluctuations from the fridge. Higher temperatures can also lead to excess humidity. When exposed to high humidity, moisture develops, which can result in a harsh smoke. You can avoid this by storing them in an airtight container instead. It can prevent the development of moisture in case of temperature changes in the fridge.

The storage period of your weed depends on the method of storage you used. The optimal storage options include refrigerators, cabinets, and airtight containers. These options rely on the marijuana strain and the form of marijuana you want to preserve.

As an example, edibles should be refrigerated, but dried buds and cannabis oils cannot thrive in such temperatures. Consider various options, though, to eliminate the substances that break down your marijuana concentrates. Changes in the cannabinoids found in weed are inevitable regardless of conditions.

THCA will eventually degrade to cannabinol (CBN), affecting the potency resulting in a decrease in quality. Ultimately, these storage options can only slow down degradation, but all weed will eventually perish.